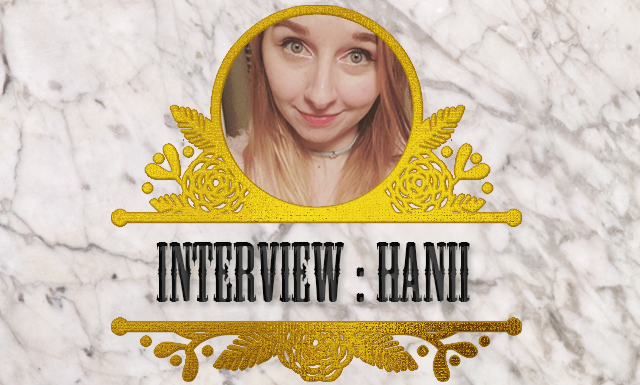 I’ve been sitting on this one for a while now due to RL being so up in the air, so I am proud to bring you the third interview here at Ruby Wings Blog; the gorgeous Hanii. Hanii is my adopted little sister and as you’ll see in the interview she is a lovely talented soul who has her fingers in many pots! Today she’s here to talk about youtube, JPop and KPop 🙂

Howdyyy! 😀 My name is Hannah, or Hanii, and I’m a dork. XD Also, I’m a dancer on YouTube and a lover of all things cute, pink, anime, manga and Hello Kitty! I love to cosplay, sing, dance, sew, talk with my friends and watch Disney movies. :3

Hi …. please tell us a bit about yourself!

Hellooo! My name is Hanii, though I used to go by Hannah or Hannie before. I just had a birthday and turned 26. I joined the online world when I was about 10 years old on Neopets and have been a part of various communities and lovely groups of people ever since. It’s a bit weird to think that’s been nearly 2/3 of my life. I love all things nerdy and am in a group that plays tabletop RPGs together–I also play League of Legends and Heroes of the Storm, among many other console games. I’m super into Pokemon, and work as a librarian, so I love books. I’m also mildly obsessed with anything on BBC–specifically Orphan Black (it’s technically a part of BBC!) and Sherlock. I’m basically a huge dork who loves to talk about how much of a dork she is on YouTube!

I’ve bounced around between all sorts of media and always loved being able to use my creativity. When I was active in the Fanlistings community, a friend at the time, Korey, had asked me to upload myself singing–we were both super into Broadway music and theatre. We weren’t sure how to record or upload it, so we decided I’d take a video facing upside-down, record my voice, then put it on YouTube unlisted for only him. Before I knew it, I was trying to learn Japanese, so I was uploading public videos of myself dancing to music from Anime and then singing to it.

Gosh, I want to say 6 or 7 years now. It’s terrible but I have no idea when my channel’s “anniversary” is and most everyone else I know even celebrates it each year. I love my channel but I’ve never been good with dates.

What does your work mean to you?

It’s part of what gets me up in the morning. When I’m depressed, I can always find a way to get in front of my camera or record myself singing to try and bring up my mood. One of my saddest days recently, the only thing that made me happy was filming a new video. It’s a way I can visually connect with people (especially my friends) visually, while promoting something I love in hopes that maybe someone else loves it or will find interest in it as well. YouTube allows me to spread my wings in all directions with my creativity as well. It’s just so fun.

I realized I wanted to pursue having a YouTube channel officially when I found channels of other people doing something similar to me and connecting through it. I started to make my videos public and received an insane amount of positive feedback. I was shocked that anyone would want to watch me flailing around in cosplay, but it was something that gave me joy. I put a lot of time and effort into making my costumes and learning the dances–the feedback made all that work feel 100% worth it, so I decided to keep at it and expand what I was doing.

This is so silly, but it was placing in a competition this big YouTuber in our community of anisong dancers (KimonoTime–though I think she changed the name of her channel) was having in my first year or so of posting videos. I worked super hard on the dance and had no expectations of doing well at all. I went to work the morning the winners were announced and my phone was just blowing up. At the time, there wasn’t really a Facebook messaging app and even the Facebook app was sort of buggy on my phone, but I had all these notifications from there and from my email. My friends were all so happy for me and the emails were tons and tons of new subscribers. I think I went from like 400 to 700 in just a few hours. I’m still very grateful that I received her support back then. She’s super nice–we even share a birthday!

What was the first piece of work you ever sold?

I was actually paid to sing in an anisong cover contest. We didn’t win, but the lovely girl in charge insisted she pay me for my services. It was a pretty difficult song–from Sword Art Online, if anyone reading knows what I’m talking about, and I was super grateful for the extra money that month.

My biggest goal is to keep at trying to put out two new videos related to Jpop or Kpop a month. Ideally, I’d like to start covering dances again, but I find I just don’t have the time needed to practice enough. I think if I can keep that up and reopen a blog that I regularly update, I can raise my subscriber count. I have no intention to ever try and be a YouTuber full time, but I definitely want to keep trying to grow my audience!

Do what makes you happy–if something stops being enjoyable, find something new that is.

Any advice for others wanting to get into your hobby?

You don’t need an amazing camera or editing equipment and never let the lack of those (or even the lack of money) stop you. I know it’s standard now for beginning YouTubers to have all sorts of equipment off the bat, but it isn’t necessary. Find your niche and just press record. I’ve actually stopped using my nice camera and am using my iPhone for recording these days. I’d love to buy a DSLR one day, or, really, any camera that blurs the background in videos, but my iPhone works perfectly. There are free editing programs out there and, if you have a Mac, I 10/10 recommend iMovie. Just have fun and be yourself–people will find you in time and you will meet wonderful people. Also, never be afraid to communicate with your viewers or with YouTubers you watch. I started my channel at nothing, then started commenting on other channels similar to mine where I met some friends I’m still close with years later. We supported each other and still do, even though we’ve taken different paths with our channels and lives.

If you were the god/goddess of anything, what would it be?

Goddess of Positive Energy–some times I feel so energetic I’m going to burst, and it doesn’t always come out in a happy manner. I’d love to inspire positivity everywhere and use my energy to do so.

CAT. I love cats. I suppose, specifically, a white tiger, so I can be both beautiful and extremely terrifying at the same time. I definitely relate most to felines, even though I love most every animal (except fish–I really dislike fish).

I’ve been told I have an innate ability to dress in items that should never go together but make them look like they do. LOL I sort of love that about myself. In terms of personality, I am definitely seen as spacey. I always know what’s going on, but I’m probably 10 steps ahead in the conversation in my mind, so I’ll often get lost, which comes across as having no idea what’s happening around me.

I collect Japanese idol photos and items related to my favorite line-up of the JPop group, S/mileage. In Japanese idol groups, the members will often change up, so the member line-up can be different. I also collect Disney tsumtsums, but only from movies I’m super into (I still need to get the Lion King set!!). Going along with the tsums, I really love stuffed animals and always have, so I tend to pick those up from time to time. My favorites right now are a Lucky from 101 Dalmatians “pillow pet” and a giant Domo (Japanese character). Domo sits next to me on my bed and is like a foot and a half tall. I admit, some times I get quite confused and think there is a monster on my bed until I realize it’s just Domo.

Please do check out my YouTube channel, if you’re at all into JPop or KPop. I talk about the music, sing the songs, eat the food–and some times do unboxings or hauls related to both cultures. I would like to start a proper blog up again, so check me out and help inspire me to do that! http://youtube.com/user/itshanni3