Have You Ever Gaming Edition Tag 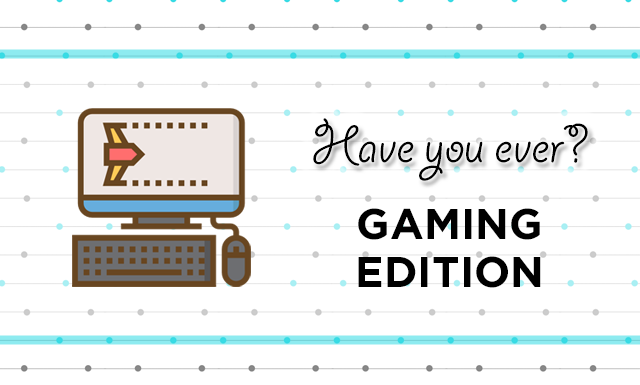 Oh yes lol. I used to be known for rage quitting World of Warcraft back in the day pretty frequently. Raids, guilds, you name it. I lost a lot of friends until I found a safe environment. I now know that it was due to unresolved mental health issues and PTSD, the latter of which I’ve only come to recognise in the last year, so I’ve put a lot of that toxic behaviour behind me.

I’m going to be completely honest though; it still happens. It happened recently because my anxiety reached a critical peak and I just couldn’t handle what was happened. After exploring what happened with my fiance I was able to unravel what I was feeling and realise that my PTSD had been triggered. I hadn’t even realised, I just knew I was getting extremely anxious and had to get out of that situation NOW.

So if you’re someone who regularly rage quits (the occasional one is normal for everyone) or knows someone who does please take the time to look beyond the game and what’s going on. Anger and irritation are symptoms of depression and other mental health conditions that really don’t get talked about that much. You’re not just behaving badly; something’s wrong and your brain is trying to tell you that.

Earned all achievements in a game

I mostly play MMORPGs which are ever-growing so while it is possible to earn all achievements in a game, it’s unlikely that most people do. That being said I’ve earned every achievement in as many World of Warcraft categories as possible and have one of the highest scores in my guild. I am an achievement whore. I’d probably have higher if I hadn’t retired from raiding due to my disabilities.

I am currently back playing Terraria right now and that has an achievable amount of achievements so it’s looking good that I’ll have my first game with all achievements completed pretty soon! Keep an eye on my progress here.

Nope; I can stay up watching something or reading in bed until 3/4pm but doing an activity that takes focus like gaming is impossible. I stop gaming for the night at 1 pm at the latest and by then I’m struggling. That’s the joy of being chronically ill.

I’ve never livestreamed but I have made a few youtube videos. I struggled to find the energy to make those videos so livestreaming is just going to be too energy intensive for me.

Yep, usually the next World of Warcraft expansion, however, I was also a beta player for Star Wars: The Old Republic and pre-ordered that so I have preferred player status. I’d love to be able to pre-order more games but to be blunt I just don’t have the money to do that.

Bought a game and never played it

I’ve yet to come across a gamer who hasn’t done this, and I’m terrible for it. I need to start organising my time better so I can play my backlog. Sorting my migraine medication recently helps with this because to play games when your head is pounding. it’s really hard or to find time to play games when you’re too busy catching up on things due to downtime from being sick.

Been jumpscared by a horror game

I jumpscare pretty easily so it doesn’t need to be a horror game to do it!

Had a set squad for a specific game

Bought a game on multiple platforms

This is one thing I will never do because I can’t play consoles due to my disabilities. My hands cramp up and I struggle to use the controllers.

Got a console for the games specifically

My fiance has, so we have a Switch, but again it’s not something I use. I do watch him playing games on it though.

I haven’t actually done many of the things on this list and I can’t help recognising the number of times I found myself saying no because of my disabilities. They obviously affect all aspects of my life, but I don’t think people realise just how much they can affect my hobbies, like gaming. Most of the time I get by, and while I miss raiding in World of Warcraft the free time has allowed me to try other games instead of constantly needing to farm potions and stuff for raids. LFR also lets me play through the content in my own time and ease so I don’t actually miss anything.

The most annoying thing is not being able to play console games. The recent PlayStation announcements included a lot of awesome looking games which I would love to play and probably never will be able to. I know I could watch a stream of someone else playing them but I prefer a more hands-on approach. Plus watching streams is also difficult for me /facepalm Yup I just can’t win! 😛

Anyway, thanks for reading the Have You Ever? Gaming Edition tag and please take a look below at the next vote which has just gone up. I’m going to be posting not one but two tags next because the poor Aesthetically Pleasing book Tag has come in second twice now. I think it’s time I take it off the vote and give you guys what you want! So look out for that and the Zodiac Books Tag, which I am really excited about, in the next coming week 🙂

Loads of people have already done this so I put the call out on twitter to find out who hadn’t already done it. As requested I’m tagging Winst0lf, Nana, Solarayo, and Kirsten! As always my loves consider yourself tagged if you want to be <3

Image Credits: Banner pattern is by justlaugh143, World of Warcraft Loading Screen image is from Wowpedia, Game console image is from Unsplash.