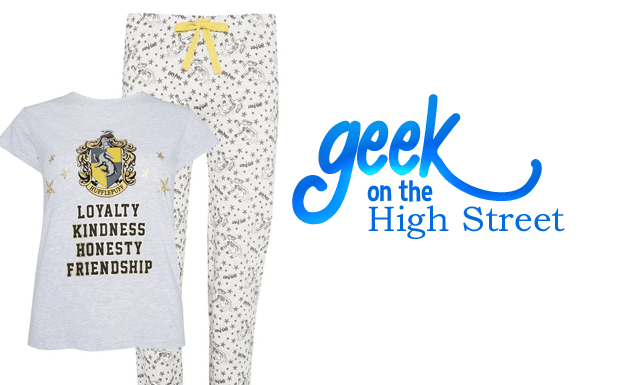 As my instagram followers know I’ve been obsessed with the new Hogwarts Mystery game so when I started seeing Harry Potter bits while searching for Disney last month I knew I’d found this month’s Geek on the High Street theme! Unsurprisingly since it’s a British based Fandom it’s pretty much everywhere these days and as we get closer to the next Fantastic Beast film more and more things are popping up in the shops. So here’s some of my favourite picks!

George at Asda has a few bits and bobs including this Harry Potter Glitter Slogan T-Shirt which features one of the most famous quotes from the franchise. This cute Pyjama Shirt and Shorts set has a very classy look about it, and is much more subtle in it’s design. Finally something a wee bit cheeky, but I had to include them as they’re just awesome; a pair of Gryffindor Knickers.

House of Fraser is newcomer to Geek on the High Street, and while it’s not quite gotten to fashion items yet I’ll accept accessories and be happy at the progress! They have some great Harry Potter bags, and I’m a total sucker for tote bags so I’m in love with this Hogwarts Crest tote bag and Voldemort tote bag. There’s a few more bags on the pinterest board, however, this Hogwarts Crest Print Backpack really stood out as it’s a different style from what you normally see. These are probably official merchandise, however, it’s still great to be able to pop into a store in your local area and check them out instead of having to hunt down a stockist or order online.

Despite Fantastic Beasts being the lastest addition to the franchise, Sports Direct was the only place where I found anything dedicated to it. They had the official Fantastic Beasts and Where to Find Them film logo t-shirt and then this quirky Witches Live Among Us! t-shirt which I think is great. They also had two other official t-shirts available; a Hogwarts t-shirt and a Gryffindor t-shirt.

Wait, Argos does clothes? No, you’ve not missed anything. They don’t sell clothes, but what they do sell is jewellery and they have an abundance of Harry Potter jewellery! As with the Sports Direct t-shirts it is the official merchandise, however, being able to pop into your local Argos (FYI for you non-Brits out there Argos stores are really common) and actually hold the product in your hand before buying is a luxury most geeks don’t usually get. There are loads and loads of bits available. I didn’t even pin every single item on the pinterest board as I would have been there all afternoon 😛 So what I did do was pin one of each design and from what I could see there’s at least two types of necklaces, a charm, a set of earrings and possibly a keyring for each design available.

These are my favourites from the bunch! 1. Ravenclaw Pendant, 2. Hedwig Necklace, 3. Love Potion Slider Charm, 4. Sorting Hat Earrings. 5. Sterling Silver Lightning Bolt Crystal Pendant (this bad boy is much more extravagant than the others and costs a mighty £59.99 compared to £9.99 for other pendants) and 6. Something a little different; Deathly Hallows Watch.

You know how the saying goes; saving the best for last and I have. When Primark launched their Harry Potter range everyone heard about it, geeks and all. It hit the papers, the national news, everything. I’d heard of it – as I said, it was difficult to miss – but due to illness I’d never actually seen it. Well now that Primark have updated their website I’ve seen it and woah, mumma. I can see why people went crazy. It is a thing of beauty. Now I just wish they would do it for every franchise! It was incredibly hard to just pick a handful of items for this post so I limited myself to six. Pretty much half the pinterest board is Primark stuff so head over there and check it out now!

They’ve got some nifty pyjama sets including this Hufflepuff Pyjama Set, Hufflepuff’s rejoice there’s a set dedicated just to you. It’s often the most overlooked house so it was nice to see them getting recognition! These Navy Harry Potter Pumps were among a few pairs of shoes I saw on Primark and they were the only store to have anything in the footwear category. They have a wide range of jewellery and accessories, including house sets like this Slytherin Jewellery Set and other themed ones like this Blue Potion Jewellery Set. And then there’s this super adorable Gryphon Keyring which I’m totally in love with! There’s a whole set of keyrings and badges of magical creatures/fantastic beasts in this style and they’re all so cute!

Have you checked out Primark’s Harry Potter products in store? Do you own any?

Do you look for Harry Potter items on the high street or only online?

Let me know in the comments, and don’t forget to tell me what your favourite items are from this months Geek on the High Street!