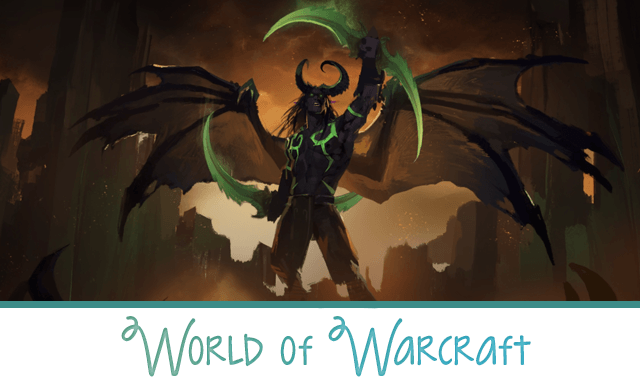 World of Warcraft is my favourite and most played game which I started playing in 2004 not long after the EU release. I started on the server Arathor, then transferred to Kul’Tiras (where I met my fiancé, Chris), then to Ghostlands before finally settling on Aerie Peak. I am a member of the guild Excited State, a fun social guild which raids twice a week.

I previously raided through all the content prior up to Legion. Raiding is when you play with a group of people, usually 10 or 25, and working as a team to kill harder bosses. So it is very much a social experience that works a lot like a team sport. Unfortunately due to being diagnosed with ME I had to retire from raiding in 2016 and now only raid casually through LFR to keep up with content.

My first character was a balance druid, and then my main became my  Kaelea, a discipline priest. I was proud to have been a discipline priest all the way through WoW, back in the days of classic and all the way through now to Cataclysm. However,  when I stopped raiding I had to let my beloved spec go as it was too difficult for me to focus on. I swapped to shadow, and I use holy for healing in pvp.

I don’t really have a main character any more, although I favour my druid Aleassa more than my priest as I find it easier to play. Over the last few expansions the order I level characters has changed and currently (August 2019) I’m still working on getting my characters to level 120. I’m in no rush and just enjoying playing the game at my own pace!

I post about World of Warcraft pretty often (here’s the tag!) as it’s my primary game, but here are a few posts I think you should check out!

Don’t forget to visit my Screenshot and Scan Gallery for all my World of Warcraft screenshots and scans!

Check out my collections

I’ve already mentioned raiding as a previous past time in WoW, my main one now is collecting – achievements, pets, toys, mounts, transmog gear and heirloom items. Yep, I am an achievement junky. I actually did the original Lore Master achievement on two characters. I love the challenge of them, and the completionist in me has to have them done.

I mainly play Alliance which is why my Horde characters are woefully underplayed.