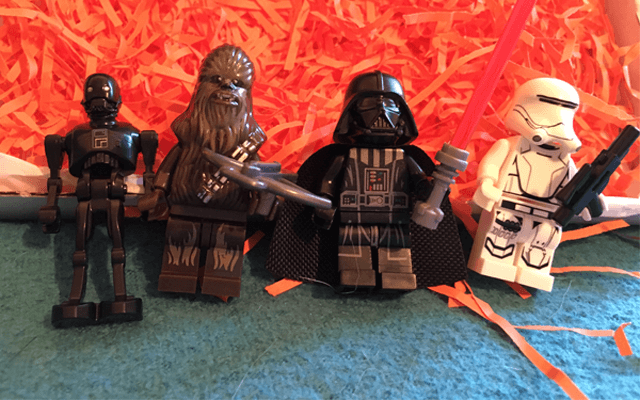 I have always wanted to receive a subscription box and so when the lovely team at Fred’s Box contacted me to offer me the chance to review one, I snapped up the chance! I had hoped to use this as a good excuse to begin my foray into the world of videos via an unboxing video, but sadly my body has decided not to comply with that request. I was good though! I sat on the closed box for a while before having to admit defeat and open it. I may still do a video after the fact, for now I hope you enjoy my review!

Their customisation options go even further; they openly offer you the chance to discuss your box with them and ask for a theme. I was offered this chance and went with the first things that came to mind; Star Wars and comic book characters.

“Every month we choose a different theme: from TV characters, to Superheroes and even Santa or the Easter Bunny. It’s not only the theme that changes each month, either – each month is unique, filled with a fresh batch of awesomeness!”

They offer you the chance to browse their Instagram, Facebook and Twitter accounts to see the full range of figures. Personally I’m holding back as I’d prefer to have it be a surprise if I get another box in the future. The prices are also very reasonable, starting £4.85 for 2 figures for a one off box. You can save a few pennies by going with a subscription for 3 months (for 2 figures) which is £14.50. Six months is £27.50 and a year is £54.00, bringing the price down each time with a yearly subscription coming in at £4.50 a month.

I was very happy to open my box and find out that Star Wars had been selected as my theme! The pre-mentioned keyrings are also Star Wars (and cat woman), and these are all brand new additions to my collection. The box was small enough to fit through my letter box, and the figures were snuggly wrapped in paper confetti – which is a good thing because my postman was not at all careful about slinging it through the post box! The paper confetti doesn’t look like much protection, however, because of the nature of the minifigures with their nooks and crannies, they actually catch in the paper and hold in place. I was able to tip the box up for photo #2 and the only thing that moved were the additional weapons.

Speaking of which; they were a nice additional touch! I didn’t expect to get little props with them, and was so excited to see that there was one that matched each figure – including a bow caster for Chewie! I also was really happy to see that there was such a mix; I’ve got two big characters (Chewie and Vader) from the original trilogy, and prequels, and then K-2SO from Rogue One (which I’ve still not seen, I know, total failure as a Star Wars geek!). The stormtrooper I’m not sure if he’s the newer edition from The Force Awakens or resembles the older ones from the OT – I’d have to hunt down some photos from the movies to actually check for sure. But the fact is, they have that much detail that I actually have to ask the question. From their helmets to the details on their chests, each figure is a wonderful miniature of much loved characters. K-2SO is a bit different from the others as he’s much thinner and his body doesn’t move as much, or come apart like the others (I may have accidentally pulled a few arms out and beheaded the stormie while trying to fit the weapons….).

I was really happy with the box! I had so much fun taking the photos of the individual figures, to the point where I have a distinct feeling you may see a photo shoot set around the house or outside with them in the future 😉 They are fantastic quality and the thought and effort that goes into putting each box together makes it really feel like someone cares about the box you receive – something that makes it even more magical, especially if you’re giving it to a child. The packaging was simple and effective, and I like that it fitted through the mailbox with ease (and survived my not-so-gentle postie bouncing it off the floor..). Sometimes you’re not able to make it to the door, or even be home, when a delivery is due so that is really useful. One thing is for sure; Fred’s box is addictive. These super cute minifigures make you want to have more! I’m thrilled to bits with my Star Wars ones, but now I want to know what else there is! It’s a little bit of magic sailing through your door every month, and whether you’re a kid or an adult, the wonder of what could be hiding in your box this time is huge.

Fred’s Box currently have a competition going on over on their Pinterest account until the end of May. So go check it out, get pinning and good luck! If you win or decide to get a box let me know what you get!

I hope you enjoyed this review and if you have any questions about something I’ve not covered let me know in the comments!