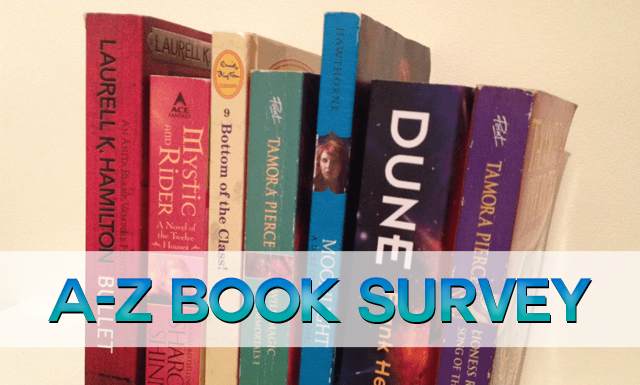 Found this thanks to Li, the original survey creator is Jamie @ the Perpetual Page-Turner 🙂

Author you’ve read the most books from:

I’m going to guess that it is Laurell K Hamilton as there are currently 23 books in her Anita Blake series, 8 Merry Gentry novels and various other books of hers that I have read and then there are the marvel comics as well. So, all in all, we’re looking at over 30 books 🙂

Oh wow, this is a hard question. I read a lot of series’ and trilogies – basically after the first book I tend to get hooked and devour everything else. I can’t actually pick just one, and so narrowing it down I have four. Tamora Pierce’s Song of the Lioness Quartet – books 2, 3 & 4 were all amazing and I have re-read them so many times. Next up is Jacqueline Carey’s Kushiel Legacy series, namely book 2 and 3 about Phedre (Kushiel’s Dart and Kushiel’s Chosen). They literally rocked my world. Those two are probably the top 2 for different reasons, so neither is first or second, both equal 🙂

The next one is relatively new to my bookshelf – Kevin Hearne’s Iron Druid Chronicles. Chris and I are just devouring all of these books right now. Each book is amazing, each following book manages to get even better. Then finally there is Gail Z Martin’s Chronicle of the Necromancer series. I was blown away by the first book and the sequels again were just amazing, brilliant writing.

Generally, any series you see me reading on my good reads account must have a decent sequel because otherwise, I’d have given up after the first or second book.

Drink of Choice While Reading:

Anything actually, I don’t have a particular drink associated to reading.

Sadly physical problems with my hands mean that holding books is quite painful and carrying them even more so. So e-reader wins for me right now.

Fictional Character You Probably Would Have Actually Dated In High School:

Ha.. where do I start?! Probably Jonathan of Comte or George Cooper from Tamora Pierce’s Tortall series.

Glad You Gave This Book A Chance:

This could apply to any book I’ve ever picked up really. So many incredible authors started with just trying one book and now I have/want to read everything by them.

Anything by Marianne Curley or Catherine Fisher. Curley is an Australian author and Fisher is British and so both tend to kinda get lost in amongst all the really well-known authors. I always find their work to be unique and fascinating. They’re both fantasy/sci-fi/magic genre, but they do tend to mix and match a lot.

Important Moment in your Reading Life:

I didn’t recognise this one until applying for my English literature degree at the University of Glasgow, and I had to think about WHY I wanted to study that course. I realised then that the most important moment of my reading life was due to my dad. When I was a kid he read Roald Dahl’s George’s Marvellous Medicine with me and from that moment the world of fantasy opened for me. It was my first introduction to the world of literature where anything could happen, anything was possible and it has influenced me as a reader and a writer.

City of Ashes by Cassandra Clare.

Kinds of Books You Won’t Read:

I have to have some elements of fantasy or supernatural in my books. So anything just historical, or just romantic don’t interest me. Crime I love as TV shows but as a reader, it doesn’t interest me. The only exception is some classics; I love Alexandre Dumas and the Bronte sisters.

As I was writing this I realised what specific book claims this title, well books as there are two and I can’t be bothered to check their length 😛  Both were for comparative literature. One is The Master and Margarita by Mikhail Bulgakov (which also wins the weirdest book I’ve ever read award as well) and the second is One Hundred Years of Solitude by Gabriel Garcí­a Márquez.

Major book hangover because of:

Probably one of my current books; Goddess of the Sea by P C Cast. I’m kinda enjoying it and want to know what happens, however, I’m having some major issues getting into it as well.

Number of Bookcases You Own:

Two (only one is for books, the other is for DVDs) and I think there are at least 2 big crates full of books under the bed 😛 That isn’t including my digital shelf aka my kindle 😉

One Book You Have Read Multiple Times:

I can read anywhere; bed, sitting at my desk, while travelling. Give me a book that I enjoy and I’m lost in it for hours.

Quote that inspires you/gives you all the feels from a book you’ve read:

A couple from Jacqueline Carey’s Kushiel Legacy series which really helped me grow as a person in many ways:

“Love as thou Wilt.”

“All knowledge is worth having.”

“That which yields is not always weak.”

“When Love cast me out, it was Cruelty who took pity upon me.”

Possibly not reading some books sooner? Although I’ve promptly caught up to date 😉 As is the case with Rick Riordan’s Percy Jackson and Gods of Olympus novels. And definitely not having enough time to read all the books I want to read!

Series You Started And Need To Finish (all books are out in series):

Most of them are all ongoing, so I’m either working my way through or waiting for the next book. I did just start the Mortal Instruments series though and so I’ve got the rest of that. I think I’m also one or two books behind on Jacqueline Carey’s Kushiel legacy series (it’s comprised of three trilogies, I’m on the third trilogy but not completed it).

Three of your All-Time Favorite Books:

Just three is evil by the way 😛

Very Excited For This Release More Than All The Others:

Probably the next Heroes of Olympus book, House of Hades by Rick Riordan. It’s out a day before my birthday so guess what list that’s going on! The way the last book ended… to say it was a cliffhanger is the understatement of the century. GIVE ME IT NOW!

Probably ignoring everyone and everything while reading. My mum banned me from reading books in the kitchen before dinner/while dinner was being prepared because she’d ask me stuff and I’d just totally ignore her. Chris would probably say I have no ability not to squeee or talk about books I’m excited about.

X Marks The Spot: Start at the top left of your shelf and pick the 27th book:

Kushiel’s Scion by Jacqueline Carey, the first book on the second shelf. The top shelf is dedicated to all my Laurell K Hamilton books, so yeah she’s definitely my most read author!

City of Bones and City of Ashes (Mortal Instruments book 1 & 2) by Cassandra Clare. We knew the movie was coming out so we got them to read before seeing it.

ZZZ-snatcher book (last book that kept you up WAY late):

Oh wow… most likely one of the Anita Blake books by Laurell K Hamilton. I was ill at the time and was reading three books a day, I was totally hooked. Nowadays it tends to be MOST books I’m reading for pleasure 😉