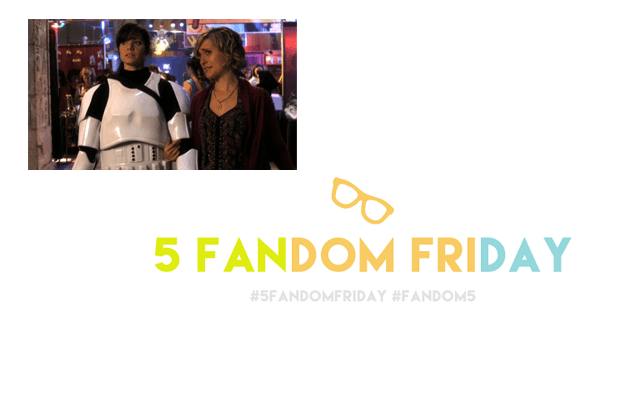 So, it turns out that I screwed up this Fandom 5 and as this weeks is a make-up one (aka do one you missed previously) I decided to redo this one. I didn’t realise womance was the equivalent of bromance and therefore pertained to friendship not actual romance. So here are my top 5 female friendships.

Jaime: “It keeps me toned.”

Eve: “So does kickboxing. And it’s a damned sight more practical too. Some guy jumps you in an alley, what are you going to do? Assume the lotus position?”

I absolutely love this series of novels by Kelley Armstrong, but the one womance that stands out is Eve and Jaime. I don’t want to give any spoilers, so all I’m going to say is that these two are forced together through a set of circumstances and aren’t anything alike. There’s no way they’d have become friends otherwise. But their friendship? It is so strong and it is hilarious at so many points.

Tamsin: What’s so great about Kenzi, anyway?
Bo: She’s, uh… She’s Kenzi. She’s smart and honest and kind. And she makes me feel normal. And special- all at the same time.
Tamsin: Oh.
Bo: She is my heart, Tamsin.

Kenzi is with Bo from the start of the show, throughout the whole omg-I’m-not-human-I-can-kill-people-with-a-kiss revelation. They’d only just met and Kenzi could have quite easily ran a mile. Instead they formed a bond, a true friendship that transcended the human-fae boundary. Most of the fae considered Kenzi to be Bo’s pet, something that annoyed both of them, but Kenzi continued to excel in her sidekick duties and went beyond the call of duty (I’ve yet to watch Season 5, so no spoilers please!). The best thing about their friendship is how down to earth and utterly ridiculously hilarious it is at times. They banter, they mock one another, they gossip and share the same thoughts – just like real best friends do.

Willow: The other night, y’know being captured and all, facing off with Faith… Things just – kinda got clear. I mean, you’ve been fighting evil here for three years and I’ve helped some. And now we’re supposed to decide what we want to do with our lives. And I just realized that’s what I want to do. Fight evil, help people. I mean, I-I think it’s worth doing. And I don’t think you do it because you have to. It’s a good fight, Buffy, and I want in.

Picking a quote for this one was super hard (and made me want to watch Buffy for the millionth time!) but I chose this one in the end because super smart Willow chose to stay in Sunnydale and help her best friend fight. Knowing that Buffy, as a slayer, would be fighting until the day she died, not to mention that slayers have a very short life span. There are people out there that would have fun a mile at the prospect of their friend dying, or them dying as a result of being involved in the life of a slayer. Not Willow, instead she signs up for full time scooby gang membership. In the show Buffy’s long reign as a slayer is attributed to her having friends and family to support her. Willow is a big part of that, and it’s one of the things that makes Willow’s turn to the dark side even more tragic for me; she knows Buffy will fight her because that is what she does, she makes the hard decisions. But her agony over Tara’s death is just too much to bear, too much for anyone to bear, including her best friends. Willow is just one aspect of the scooby gang, but she’s Buffy’s closest female friend and when they head off to college you especially notice just how important having that girl pal is for young women as they grow into adulthood.

These guys are strong, been through hell several times, saved the world more times than you can count and are still goofy with one another. I learned so much from this show and so many Buffy/Willow quotes live with me as I go through life, none more so than Willow’s “love makes you do the whacky” – which honestly, I think every young woman needs to be told by their best friend at least once.

Chloe Sullivan: Look, and Lois even made her world famous rum cake for you.
Lois Lane: From scratch.
Clark Kent: (looks at the slanted cake) Oh. I never would’ve guessed.
Chloe Sullivan: You should’ve seen the first two.

It has been a while since I watched Smallville but straight away these two cousins popped up. They had to go on this list. However, it has been so long and with 10 seasons of it, finding a quote took me ages. There’s probably better ones out there but I ran out of time to find one. Anyway, to this day Smallville’s Lois Lane is my favourite version, and her relationship with Chloe is so great. They’re more like sisters than cousins and that means they’re not afraid to tell the other one when they’re being an idiot. They know each other inside out and have an incredibly strong bond.

Nell: I analyzed him the best that I could, but… yeah, I was wrong.
Hetty: Well, Intelligence only takes us so far.
Nell: Why is that?
Hetty: We’re human. We’re too mercurial to ever really be known.
Nell: Hm. Hettie, as an intelligence analyst, not exactly encouraging.
Hetty: Well, I’m not suggesting that it is. It’s a reminder. Our work is never done.

If you’ve never watched NCIS: Los Angeles then the first thing I need to tell you is Hetty is described by one of the other characters as probably being “the master of the universe”. She has her fingers in every pie, even the ones no one knows exists and nothing gets past her. She frequently takes people under her wing, and Nell is no exception. But unlike the other characters, such as Callen and Kensi, Nell is shaping up as Hetty’s protege and at times it is scary how much they think alike. Nell has a relationship with Hetty unlike anyone else and she has her respect despite being so much younger and less experienced.