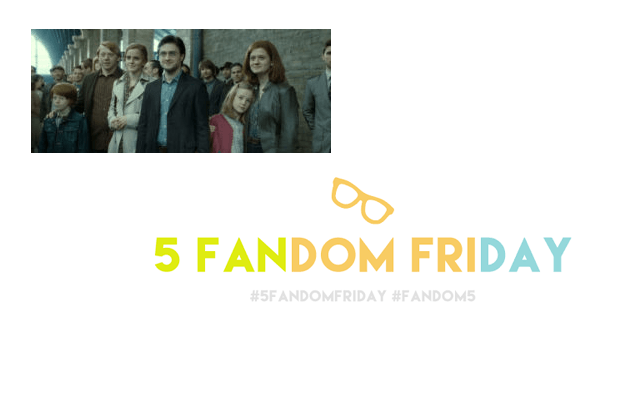 One thing I noticed when trying to write this prompt; it was very hard to narrow it down to just 5 moments and all the ones I chose came from the later books. I’m not sure why that is, it might be because I was an adult reading about teenagers and so I identified more with them as they got older. Or perhaps it was the culmination of everything, of all the links and stories finally coming together.

This is technically two moments that I am rolling into one. In Half-Blood Prince Hermione slaps Harry on the head and also conjures birds to chase Ron. Both times the boys are being complete numpties and needed (in Harry’s case a literal) slap. I loved these two moments because for me it emphasised just how silly boys can be at that age, and how frustrating for girls it was because we mature at a different speed. Not to mention Hermione is badass 😀

It’s become one of the classic and most well known moments of the Harry Potter world, and for a good reason. After losing one son in the battle, Molly does whatever she has to to protect her only daughter and proves that you don’t want to mess with a mother and her child. Up until this point Molly has been the mother hen, looking after everyone and not necessarily promoting violence. But even she realises that sometimes there is such evil that the only thing you can do is fight and you have to win for the sake of your family.

I’m a sucker for romance and I saw this relationship early on, watched it ebb and flow and both make decisions that hurt the other. In the end the way they got together was perfect and fitted with the pair. They were never going to be the type to sit down and have a romantic dinner. This was a friendship that had grown and blossomed through pain and sacrifice, and it was only ever going to happen in the middle of everything crazy and dangerous going on. I have to admit; I cheered when this finally happened, maybe even teared up a bit.

I tear up even thinking about this, writing about this and I think I always will. Snape’s true intentions were always difficult to pin down, and finally when Harry gets to view Snape’s memories he and the readers finally learn the truth. It is a lesson of love, unrequited but never ever ending, and it is beautiful, sad and tragic. It is portrayed in the movies beautifully and elegantly by the recently departed Alan Rickman which I think just adds to the building of emotional and sadness attached to this moment. It’s so powerful and to think, it’s all summed up in one single word.

For me the epilogue makes this list not because we get to see the trio grown up and with their kids, but because of the scene where Harry and Ginny’s son James spots Teddy (Remus and Tonks son) snogging his cousin Victoire (Fleur and Bill’s daughter).

James Sirius : “Our Teddy! Teddy Lupin! Snogging our Victoire! Our cousin! And I asked Teddy what he was doing —”

Ginny Potter: “You interrupted them? You are so like Ron —”

James Sirius : “— and he said he had come to see her off! And then he told me to go away! He was snogging her!“

It’s like, despite everything that has happened and 19 years have passed, everything is still very much the same. There’s still a bunch of kids following in their parents footsteps and heading off to Hogwarts on Platform 9 3/4. You also get the sense that there these kids are going to be as much – if not more – of a handful than their parents.

There’s also the parallels that can be drawn between Teddy and Harry. Both lost their parents battling Voldemort, but until with Harry, Teddy is surrounded by his extended family. As James shares the gossp about Teddy and Victoire, his sister is pleased to hear the news and hopes that they will get married so that Teddy is an official member of their family (Potter/Weasley). It is the end of the series, which is sad in itself, yet I found myself happy and excited for the characters rather than lamenting the end of the books (as it was at the time).

How about you? What are your favourite moments from the series?