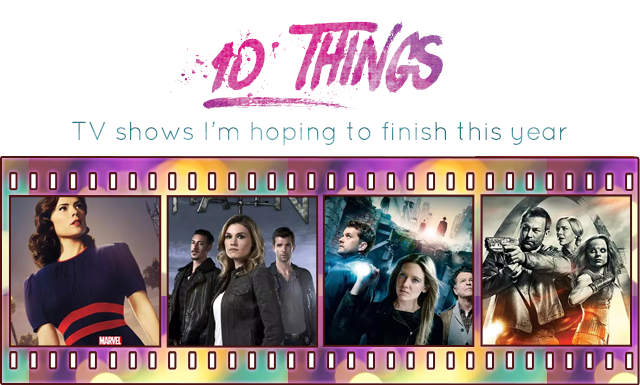 I have this really bad habit of binge watching shows and then sudden dropping shows mid-season, especially the last season. There’s been various reasons over the years and the result is a bunch of shows that I need to finish. I’ve been trying to work my way through the list for a while now because I hate leaving things unfinished. I need to know how the stories end, and if I don’t actually take the time to finish previous shows before starting new ones the list just becomes never ending. So this year I’m trying to finally catch up! Here is my list of 10 TV Shows I’m hoping to finish this year.

In 1946, Peggy Carter is relegated to secretarial duties in the Strategic Scientific Reserve. When Howard Stark is accused of treason, he secretly recruits Peggy to clear his name with the help of his butler, Edwin Jarvis.

Reason for stopping: I absolutely loved Agent Carter and the reason why I haven’t finished Season 2 yet is really simple; I can’t bear for it to be over. I got caught up with other shows and when it was time to catch up the news had circulated that it had been cancelled. Several years later and I’ve still not been back to finish it.

Set on a future Earth, Defiance introduces players and viewers to a world where humans and aliens live together on a planet ravaged by decades of war and transformed by alien terra-forming machines. It centers on Jeb Nolan, the law-keeper in a bustling frontier boomtown that is one of the new world’s few oases of civility and inclusion. Nolan is a former Marine who fought in the alien conflict and suffered the loss of his wife and child in the war. The trauma transformed him into a lone wanderer in the wilds of this new and dangerous world.

Reason for stopping: Defiance was one of those shows that I enjoyed but was never quite top of my watch list, hence why out of the 3 seasons available I’ve only watched one. I was actually surprised that I’d only watched one because I was so sure I’d watched Season 2. It’s still a show that I’ve been meaning to finish despite the lack of attention I’ve given it and that’s why I’ve popped it on this list.

The series follows a Federal Bureau of Investigation “Fringe Division” team based in Boston. The team uses unorthodox “fringe” science and FBI investigative techniques to investigate a series of unexplained, often ghastly occurrences, some of which are related to mysteries surrounding a parallel universe.

Reason for stopping: Chris and I were watching the final Fringe season together back when DVD rentals were a thing rather than streaming services. You only got 1-2 DVDs at a time which meant you could never binge-watch an entire TV show and for whatever reason, we stopped watching the show together (this happens a lot as we end up on separate schedules). Chris continued watching it and finished the show, and I couldn’t bear to go on because in the last episode we watched something terribly heartbreaking happened. I’ve been putting off finishing Fringe ever since.

When shrewd and confident FBI Special Agent Audrey Parker arrives in the small town of Haven she soon finds herself caught up with the return of The Troubles, a plague of supernatural afflictions that occurred in the town at least once before. If that was not enough to draw her in, she also finds a link that may lead her to the mother she has never known.

Reason for stopping: Have you ever watched a show and had a major plot point happen that shocked you to your core? The previous season ended on a major cliffhanger and I don’t want to watch what happens next! I’ve been avoiding finishing Haven ever since.

An ancient organization hidden beneath the Metropolitan Public Library dedicates itself to protecting an unknowing world from the secret, magical reality hidden all around. The group solves impossible mysteries, fights supernatural threats and recovers powerful artifacts, including the Ark of the Covenant, the Spear of Destiny and Excalibur.

Reason for stopping: I love The Librarians, and I don’t have a particular reason for not finishing this show apart from it’s just one that has always fallen through the cracks. There’s always been something else to watch and again, it’s a Syfy show so at times getting hold of it was hard. When creating this list I had to remove a show (Dominion) because there is no way to actually watch it in the UK without paying for it. Syfy doesn’t offer boxsets for streaming so if you don’t catch the show when it’s available you’re stuck. Thankfully The Librarians is available on Amazon Prime so I can finish this one!

Lost Girl focuses on the gorgeous and charismatic Bo, a supernatural being called a succubus who feeds on the energy of humans, sometimes with fatal results. Refusing to embrace her supernatural clan and its rigid hierarchy, Bo is a renegade who takes up the fight for the underdog while searching for the truth about her own mysterious origins.

Reason for stopping: Lost Girl is a combination of the same reasons as other shows on this list, and basically I’ve been avoiding saying goodbye to a show I really loved.

Merlin is a drama series based around the legends of the mythical wizard and his relationship with Prince Arthur. Set in the early days of their relationship, it shows the development of each in his respective field, finding his way on the path to future greatness. Humour, danger and excitement abound, accompanied by mythical creatures, magic and of course much medieval swashbuckling.

Reason for stopping: Really simple; I didn’t want the magic to end. As time went on I just kept forgetting about it and every so often I’d remember ‘oh I never finished Merlin!’ and then a new show would pop up and sweep away that memory again.

Once Upon a Time

Emma Swan, a 28-year-old bail bonds collector, has always been a fiercely independent person since being abandoned as a baby. Her son Henry, who she gave up for adoption years ago, finds and tries to convince Emma that she is Snow White’s missing daughter. Henry shows Emma that in the fairytale, Prince Charming and Snow White sent her away to protect her. Emma doesn’t believe him and takes Henry back to Storybrooke…

Reason for stopping: Once Upon a Time is one of those shows that I’ll watch in mini binge sessions and then stop for years at a time. Then I’ll become fascinated with it again and watch a few seasons. I have a few fantasy-esque shows like that. I’ll need to spread this one out across the year, and between the other shows on this list if I want to actually finish it.

Reason for stopping: Two things stopped me from finishing Primeval New World; my brain exploded at the revelations and then the show was cancelled. The thought of finishing the final two episodes and knowing that I’d probably end up with tonnes more questions than answers (that’s Primeval all over) really put me off finishing it. If I didn’t finish it I could remain ignorant and the show wouldn’t be spoiled as many other 1 season-cancelled shows have been. Yet there’s always been that little niggling wonder of what does the 2-part finale actually contain? Time to find out. Something I’d really like to know before I get it spoiled at a convention, especially when one of the actors from the original Primeval seems to be a regular guest!

“I saw amazing things, out there in space. But there is strangeness to be found wherever you turn. Life on Earth can be an adventure too… you just need to know where to look!” Ms. Sarah Jane Smith is back in action, discovering alien plots to take over the world, or simply helping a lost one get home… Sarah Jane and her new friend Maria Jackson, and her newly (and genetically grown) adopted son Luke Smith have no problem taking on any challenge!

Reason for stopping: It’s fitting that this ended up the last one of the list (alphabetically) because the reason for not finishing this show is the saddest of all. While I was watching this season in 2011, Elizabeth Sladden the actress who plays Sarah Jane Smith passed away from cancer. I was a huge fan of the show and I was absolutely devastated at her sudden passing, especially as I realised that she must have been sick while filming the final season. I just couldn’t contemplate watching any more of The Sarah Jane Adventures at the time, but now it’s time to remember her and finish her final season as Sarah Jane.

How about you; do you have a habit of abandoning shows as I do? Do you go back to the ones you want to finish or is your backlog still ongoing?